Everyone has heard that "goats eat tin cans." But your research about goats shows that everyone says it is a "myth."

YES! Goats WILL Eat ANYTHING!

All the other goat 'experts' insist that "goats do not eat garbage."

They say goats are "picky eaters" who will eat "only the most nutritious" feeds.

Then they say don't believe the old story of "Bill Grogan's Goat."

Here is what I say: All those 'experts' are full of goat berries!

Goats WILL eat (as in chew and swallow) ANYTHING that fits down their throats, even if it kills them.

And I have the dead goats to prove it:

What Killed This Goat? 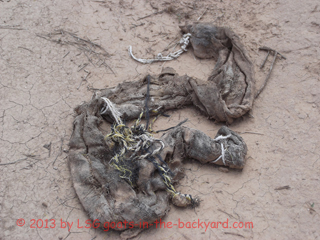 Did this goat eat tin cans? No.

This is a piece of carpet backing tangled with several pieces of baling twine. This wad of stuff is four feet long and averages six inches in diameter.

This was in the stomach and intestine of the above goat one week before these photographs were taken.

The baling twine came from a bale of hay or straw. The carpet backing came from a piece of carpet that was about 3x5 feet in size.

How do I know this?

The day I found this wad of stuff (and I’ll tell you how we got it in a few minutes), I went back to that goat’s pen and dug up three other pieces of 3x5 foot carpeting and several lengths of baling twine. 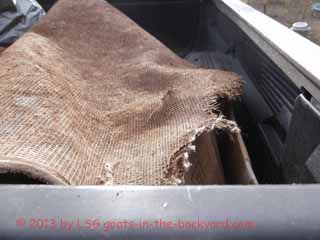 This pen doesn't look dangerous, does it? It ended up being deadly. 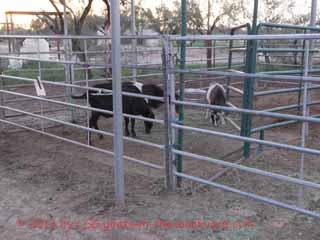 The dead goat was one of my bucks (he's the one in the middle in the above photo). He was seven years old, a half LaMancha/half Nigerian Dwarf.

Although he was technically a "Mini-Mancha" he was as big as a full-sized LaMancha (about 28 inches tall at the withers and weighed about 175 pounds).

The black goat standing next to him is a purebred LaMancha buck, who was only slightly taller and not quite as heavy.

We had recently relocated to a new property and I had put these bucks in a corral that the last people had used as a goat pen.

I looked around for any possible hazards, but had not thought to completely rake through the flooring.

The other pens had been lined with horse mats -- the thick rubber kind -- to give solid footing in case of the occasional mud from a rainstorm (this is the desert, rain doesn't happen often).

This pen, however, had been lined with pieces of old carpeting and they were buried out of sight under old straw and dirt.

I didn't see the carpeting, and might not have thought anything if I had, but the goats found it. This buck being the 'top banana,' swallowed all of it himself.

No one saw this buck eating carpeting or baling twine.

The first sign that something was wrong with him was when he stopped eating hay.

Normally he was a very 'pushy' eater, taking more than his share if he could get it away from the other bucks.

So when he began just nibbling at hay, we started watching him closely.

He was still drinking water (we all saw him do it). He WAS eating a little, just not as much as usual.

He still peed, and for awhile, pooped. His eyes were clear and bright, he was active, alert -- basically, his normal self.

We talked about it and decided that it was either the move (to a new place as well as a new climate) or it was the weather (the day temperature was hitting 100+ degrees -- that puts me off my feed!).

Seeing no other symptoms, and finding no reason to really worry, we took a "wait-and-see" plan of action.

Four days later he was dead.

He never bloated. He showed no signs of colic. He wasn't distressed. He never stopped drinking. He never got listless.

This goat dropped dead late Saturday night, in the middle of the open range (our nearest neighbor is about a mile away).

We had no way of digging a hole (dry desert soil and only a hand shovel), and we really, REALLY wanted some idea of why he died.

We chose to do a "desert necropsy" on him.

So we hauled his carcass off away from the house and let the buzzards open him up.

In less than a week, this is what he looked like: 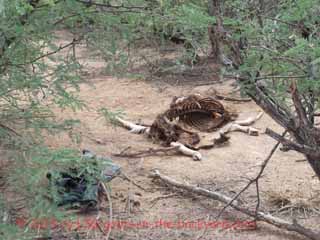 As the desert critters worked on him, we watched (well, going back to check on their progress several times, not actually standing there "watching" -- ick).

Within a couple of days we had found this: 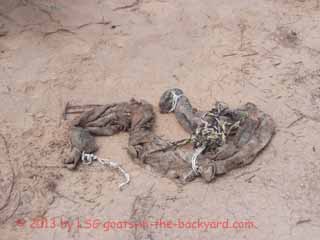 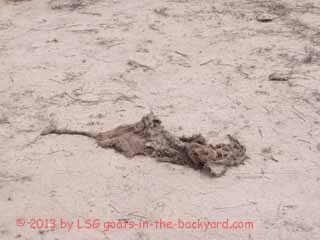 Literally, as soon as I saw this garbage (that goats won't eat) coming out of the intestines of this recently-dead goat, I went straight back to the buck pen and got started searching.

I immediately dug up this: 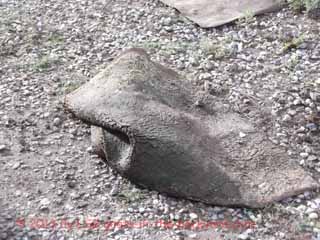 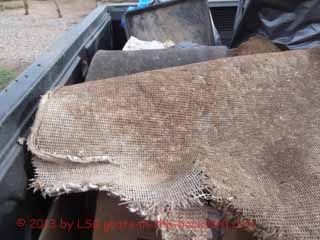 Looks just like the wad of stuff in the pictures above, doesn't it?

This Wasn't the First Time

This buck is not the first goat I have lost due to "goats eating tin cans." Unfortunately, I'm sure it won't be my last.

No matter how diligent, no one can find every stinkin' thing a goat might decide to try to swallow.

I lost a good milking doe to a tarp -- a plastic tarp, not canvas. It was strapped to a metal carport frame to provide shade to the doe pen.

The wind had torn out the edge at a grommet and the doe ate it one little plastic string at a time. She ended up eating about a 1x6 foot strip of it.

It took three weeks and we didn't notice a thing until she was dead. Who notices a tarp disappearing one millimeter at a time?

I have also had goats try to swallow:

I have also heard stories from other goat keepers about their goats (or goats they have been around) killing themselves by eating:

While I do want to convince you that goats WILL eat, if not actual "tin cans," then pretty much anything else, I don't want to leave you with the thought that every goat, every day is going to kill itself eating garbage.

Even in my own (idiotic) herd, not every goat will do this. The two bucks in the same pen with the buck who ate the carpet backing didn't do it. They had plenty of opportunity before we figured out what happened -- they knew the carpets were there, but neither one ate them. Thank God.

Know goats are stupid, so watch 'em like a hawk.

And don't EVER fall for the lie that "goats don't eat tin cans."

Copyright © 2011-2022 by www.goats-in-the-backyard.com
All Rights Reserved. No reproduction without permission.